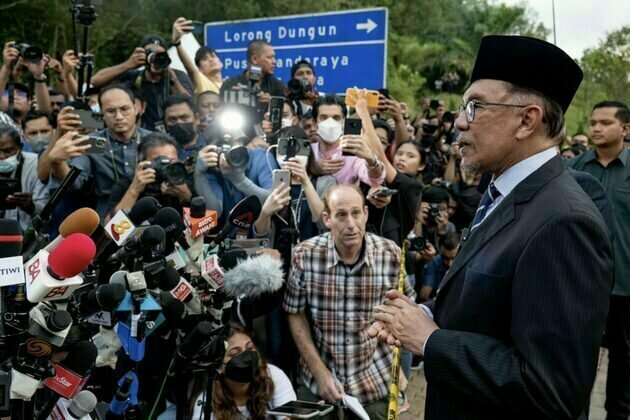 Ensuring Malaysia's political system is free of corruption and cronyism will be an uphill battle for the new government.

When Anwar Ibrahim was finally sworn in as Malaysia's latest prime minister this month he was quick to repeat the promise which helped him win office in the first place: to drive corruption out of politics.

"We will never compromise on good governance, the anti-corruption drive, judicial independence and the welfare of ordinary Malaysians," he said hours after he was sworn in, before leading chants of "Reformasi" - his rallying cry for reform during years of opposition.

Cases such as former deputy Prime Minister, Ahmad Zahid Hamidi's graft trial and the controversial 1MDB case have shone a spotlight on the darker side of Malaysia's political financing. The cases have tarnished the country's reputation and highlighted poor governance and the lack of political will to tackle corruption.

While political donations are legal, there is a risk they can lead to the misappropriation of funds, cronyism and conflicts of interest. In Malaysia, donations and kickbacks are handed out in exchange for political support. This is how money politics contributes to corruption.  The practice ramps up during election campaigns although Malaysia's Election Offences Act (1954) was enacted to police and prosecute any unethical and illegal activities during elections.

Stamping out corruption will be a major challenge to the new government. The relationship between politics and business is a major source of illicit political funds. Businesses have the desire to build monopolies by offering contributions to politicians who will support their interests.  Cronyism is common with some MPs and public officials providing businesses with access to free or subsidised public goods, tax reductions and/or licensing.

In a bid to stop the practice, Malaysia is set to implement a Political Funding Bill to ensure accountability through transparency of political financing or donations. In 2021, the Centre to Combat Corruption and Cronyism (C4) released a report revealing some worrying evidence of unauthorised transfers of cash into foundations created by political elites (from both ruling and opposition political parties) under the guise of political donations.

The new law - if passed -  is expected to enhance transparency by requiring politicians to disclose the source of their donations and how the funds are channelled to, and managed by,  the political party. At the moment, political parties and candidates are under no obligation to reveal where their funding comes from. This transparency is a key plank of political finance regulation which also includes limits on contributions and campaign spending. In addition, the election also saw the anti-hopping party law finally take effect, preventing politicians from switching parties.

In August 2022, there were plans to table the political funding bill in October, but the general elections halted the process.  Now it is hoped the new PM will push ahead with the legislation.  The All-Party Parliamentary Group Malaysia (APPGM), which was formed to look into all aspects of political financing, recommends having a  parliamentary select committee made up of members from across the political spectrum to draft the funding bill.

Although it is nearly impossible to have a comprehensive political funding law, the main idea is to have transparent funding that aligns with voters' expectations of a level playing field.

A holistic and integrated system can combat money politics and sustain the quality of democracy. Four stakeholders play a significant role:  public officials, political parties and candidates, people or organisations with oversight (such as an Ombudsman), and donors. These all need to collaborate and provide opportunities to strengthen the accountability and effectiveness of systems and governance. Understanding how political and economic processes work is crucial - in particular the incentives, relationships, and distribution and power dynamics between different groups and individuals.

Before the election, many of the then-opposition members of parliament declared their assets and net worth. While this initiative looks good for transparency, the same effort can be seen as having a political agenda. There are calls for politicians' assets to be made public every year, or when they acquire new assets. Especially politicians in influential positions (such as cabinet ministers).

After all, public officials in Malaysia are obliged to make asset declarations whenever they acquire anything new or dispose of their assets, including their spouses' assets as instructed by government circular. Assett declaration could contribute to another layer of checks and balances in holding our politicians accountable.

US files antitrust case against Google over digital advertising

WASHINGTON D.C.: The US Justice Department has filed an antitrust complaint claiming that Google is abusing its dominance in digital ...

Public health experts have welcomed Mexico's ban on cigarette smoking in all public places, including hotels and beaches, after the ...

France military ordered out of Burkina Faso in west Africa

OUAGADOUGOU, Burkina Faso: As Burkina Faso, in western Africa, faces an Islamist insurgency, it is set to end a military ...

As births continue to fall, Japan seeks incentives for parents

TOKYO, Japan: Japanese Prime minister Fumio Kishida said this week that it was "now or never" for Japan, one of ...

US moving towards offering annual Covid vaccines to most Americans

WASHINGTON D.C.: As part of its efforts to simplify the national COVID-19 vaccine strategy, the US Food and Drug Administration ...

As births continue to fall, Japan seeks incentives for parents

TOKYO, Japan: Japanese Prime minister Fumio Kishida said this week that it was "now or never" for Japan, one of ...

As travel opens up, Thailand prepares for 5 million Chinese tourists

BANGKOK, Thailand: Following China's reopening and the end of its strict COVID-19 restrictions, businesses on Thailand's holiday island of Phuket ...

'It's murder, not suicide.' Protesters blame govt after man sets himself on fire

KATHMANDU, Nepal - On Tuesday, a 37-year-old man died after setting himself on fire in front of the Parliament building ...

Japan's Kishida expected to visit Ukraine for talks with Zelenskiy

TOKYO, Japan: The Yomiuri newspaper has reported that Japanese Prime Minister Fumio Kishida is planning to visit Kyiv in February ...