Recognized as D&I leader by the Cercle Suisse des Administratrices 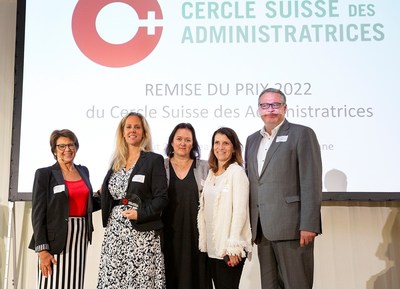 The Cercle Suisse des Administratrices is an association that promotes diversity and competencies within governance bodies - Board of Directors and management in Switzerland. It was created to give more visibility to the many women playing a senior role on management teams and boards of directors and its awards are widely considered the most prestigious in the diversity arena in Switzerland.

The judges applauded Firmenich's inclusive culture, the strong representation of women across senior leadership roles, the absence of gender pay gaps, and its equitable recruitment, training and mentoring programs. Firmenich was selected as a finalist out of 36 companies and received the award during a ceremony held at the Beau-Rivage Palace in Lausanne.

"I am very proud that Firmenich received the 2022 Grandes Entreprises Award from Cercle Suisse des Administratrices," said Mieke Van de Capelle, Chief Human Resources Officer, Firmenich. "This award recognizes our ongoing efforts in embedding equality across our leadership and senior roles worldwide, as well as across the wider organization. We continue to set the standard for excellence as the best place to work in our industry. While I am very proud of this achievement, we recognize this is a journey. Therefore, we are constantly focusing on new frontiers with targeted actions that go beyond gender. By embracing the power of inclusion, we continue to be a leading creative powerhouse."

"Firmenich was selected out of 36 companies and the Jury was particularly appreciative of the voluntary and long-standing commitments of this family-owned global company. The progress and results of its diversity and inclusion programs and the policies across all levels of its organization and its Board of Directors, are among the defining elements that were taken into consideration by the Jury," said Dominique Faesch, Presidente du Prix 2022, Cercle Suisse des Administratrices.

Since 2018, Firmenich has raised women's representation in leadership roles to 46%, and eliminated gender pay gaps. According to the UN, women earn 77 cents for every dollar men earn for work of equal value. Firmenich has also expanded flexible working opportunities worldwide, made recruitment and promotion practices more diversity-focused, created diversity and inclusion training and mentoring programs, and enhanced equal representation at all levels including critical pathways to senior management. Since 2020, 50% of Firmenich's Executive Committee are women.

In addition to achieving gender equality, Firmenich is also focused on raising the bar with targeted action beyond gender. This is about embracing the power of inclusion of minority groups, securing effective representation and engagement of people with different abilities, ethnic and socio-economic backgrounds and sexual orientation.

Building on its achievements, the Firmenich's Environmental, Social and Governance (ESG) strategy sets ambitious 2030 people goals, including commitments on human rights, ethnic pay equity, creating 5,000 job opportunities for youth and continuing to raise the representation of differently-abled people in its workforce to 10%.

This Award is one of many milestones along Firmenich's journey to be the most inclusive player in its industry and the world of work. Firmenich was the 7th company in the world and 1st in its industry to be globally certified as a gender equal employer by EDGE; the Group was recognized as a Diversity & Inclusion leader with the Responsible Business Award by Ethical Corporation; Firmenich's CEO joined the Valuable 500 movement to put disability inclusion on their leadership agenda; and Firmenich was one the first four companies in French-speaking Switzerland to receive the Swiss LGBTI* label.

The Cercle Suisse des Administratrices Awards 2022 showcased companies leading in gender equality and women leadership. For more information on the awards, visit the website at https://cercle-suisse-administratrices.ch.

Firmenich, the world's largest privately-owned fragrance and taste company, was founded in Geneva, Switzerland, in 1895, and has been family-owned for 127 years. Firmenich is a leading business-to-business company specialized in the research, creation, manufacture and sale of perfumes, flavors, and ingredients. Renowned for its world-class research and creativity, as well as its leadership in sustainability, Firmenich offers its customers superior innovation in formulation, a broad and high-quality palette of ingredients, and proprietary technologies including biotechnology, encapsulation, olfactory science, and taste modulation. Firmenich had an annual turnover of 4.7 billion Swiss Francs at end June 2022. More information about Firmenich is available at www.firmenich.com.

The Cercle Suisse des Administratrices is an association that defends diversity and skills within governance bodies (Board and management). It was created to give more visibility to the many women whose profiles are sought after by non-executive boards of directors.

The Cercle Suisse des Administratrices Award is awarded to a company whose leadership includes at least 30% women at its Board level and 20% at its managerial levels, and which adopts policies in favor of increasing women's representation in management and executive positions. Its jury is composed of representatives of the economy and the media.

TEL AVIV, Israel - The Israeli army has approved using drones to carry out assassinations in the West Bank.The extraordinary ...

LONDON, England: As Britain adjusts to its first new head of state in 70 years, the government printers responsible for ...

MATERA, Italy: In off-the-cuff remarks on September 26, Pope Francis urged Italians to have more children. While in southern Italy ...

OTTAWA, Canada: Canada has appointed Jennifer May as its first female ambassador to China, taking over a role that has ...